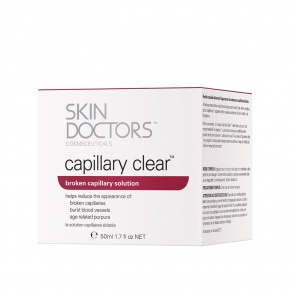 Broken capillaries appear mainly on the nose and cheeks as red, spidery marks.

Capillary Clear™ reduces the appearance of broken and expanded capillaries!

Broken capillaries are unpleasant, red, spidery marks that appear primarily on the nose and cheeks. They are caused when smaller capillaries are stretched by the pressure of larger veins which ultimately results in their expansion. Broken capillaries are often genetically determined and depend on the strength of the blood vessels. Alcohol consumption or too much solarradiation are other known causes.

This comprehensive cream quickly and gently reduces the appearance of capillaries and blemishes on the skin’s surface. Capillary Clear™ contains Phytotonine, a botanical complex that has been scientifically proven to reduce visible discoloration and reddening of the skin. Capillary Clear™ can also be used for rosacea and erythema.

Phytotonine: Phytotonine is made up of concentrated extracts of Arnica, Cypress and real Solomon’s Seal. It is rich in flavonoids, saponosides and procyanidols that have a positive effect on the microcirculation and the strengthening of the vessel walls. By repairing the capillary walls, the appearance of damaged capillaries is improved.

Salicylic Acid and Lactic Acid: These Hydroxy Acids help make the skin appear firmer and less transparent, reducing the visibility of the capillaries.

Gently cleanse and dab the skin dry. Apply the cream, avoiding the area around the eyes. Massage the cream into the skin until it is absorbed. Complete the treatment with moisturizing cream. In order to protect the skin and to make sure the treatment is a success, we recommend the use of sunscreen with a minimum SPF rating of 15.

How do broken capillaries occur?

Broken capillaries are unpleasant, red, spidery marks that appear primarily on the nose and cheeks. They are caused when smaller capillaries are stretched by the pressure of larger veins which ultimately results in their expansion. Alcohol consumption or too much sun are other known causes. Broken capillaries are often genetically determined and depend on the strength of the blood vessels. Frequent use of Capillary Clear helps you achieve visibly healthier capillaries until they gradually disappear.

How does Capillary Clear work?

The active ingredients in Capillary Clear help improve the elasticity of the blood vessels and help them repair themselves, also preventing future damage. In addition to this the clotted blood is also dispersed.

How long do I have to use Capillary Clear to achieve visible results?

Depending on a person’s skin type, the extent of the problem, the strength of the skin and the pH-value, the duration of application and final results may vary.